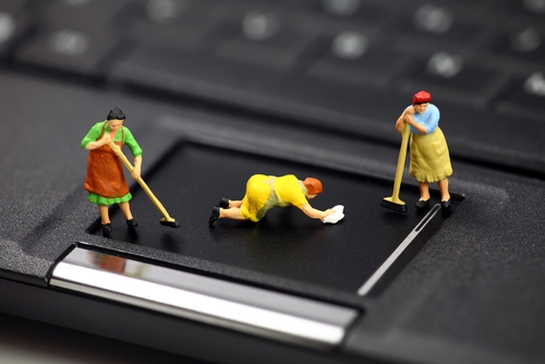 What do you do when spring cleaning goes wrong? Here’s the deal. My wife and I are in the throws of relocating, so there is much to do – purging stuff you have had for years and keep coming up with excuses on why you need to keep it. Then there is the excitement of finding a new place, learning about your new city, and experiencing a new environment. Did I mention the other stuff like packing up a house you have been in for almost 7 years?

I am dumbfounded with how easy it is to accumulate stuff and so hard to throw stuff away. I think I may have just discovered I’m a great candidate for being classed as a hoarder. I need therapy, like yesterday.

Anyways, I am cleaning up, organizing my office, and purging stuff when I come across a yellow envelop. It’s the big yellow business style and it’s pretty thick. I open the envelop and immediately remember why it was hidden in a computer bag that I seldom use. You want to know what was in it, don’t you? They were evaluations from church members I previously pastored.

I put them in the computer bag because I was going to get to them eventually and I knew (let me stop right there before lightening comes down and strikes me). They were put in the bag because I was afraid to read them and didn’t want to know what others were thinking or saying about me (supposedly my ministry effectiveness and not “me”). Curiosity mostly and a bit of courage moved me to read through them quickly. It was about 50 evaluations if I had to estimate but that was hardly indicative of the number of people in the congregation. This represented the sample of folks who were either encouraging and caring enough to let me know how I helped them or evil and sinister enough to tell me I was the worse pastor they ever had.

Now you can see why I really didn’t want to read the evaluations. Let me turn the camera away from the documents and focus on me. I’m a pretty interesting personality to put it mildly. I believe I am the world’s greatest guy, laid back, easy going, hard working and very focused on fulfilling God’s purpose for me on on the earth. However, I find it uncomfortable getting to know people or engaging them. Actually I am a bit scared of people to tell you the truth. I think they call this an introvert.

Nevertheless, in pastoral ministry this is like a scarlet letter. When people find out that you are honest enough with who you are and comfortable being that way although you try to not make others feel less important or irrelevant, some people can’t handle your honesty and will take it as an opportunity to shoot you dead with the bullet you just gave them. That’s what I found in a handful of the evaluations.

There were people that criticized me and my effectiveness because of something I admit to people and work on trying to improve with them. The very people who pointed out that I am introvert and struggled to engage people have no ideal how hard I try to navigate the waters of interpersonal relationship building. I honestly know this is a weakness of mine so I intentionally try to do little things that convey a different being. When I read these reviews (again it was only a handful) I was devastated. I regretted cleaning up and purging stuff. My day was ruined and I began to default to the very thing that an evaluation pointed out – I took it to heart. Those few evaluations led me to question whether I had what it took to be a good pastor. It bothered me greatly reading those few negative reports.

Then I woke up this morning and found this word from the LORD. It began to minister to my frail ego and as I write it is resetting my perspective on what really matters most. If you are like me and you don’t do well with criticism, remember this, all criticism is not destructive and more important than what is said is how you will respond to it. God reminded me this morning, HE “pays no attention to what others say . . . about you.” God is awesome enough to judge you by your own merits. He’s God enough to know that you and me are “fearfully and wonderfully made.” (Psa 139:14) As a matter of fact God is so invested in you and me that often he must assure and reassure us, “I knew you before I formed you in your motherâ€™s womb. Before you were born I set you apart . . .”(Je 1:5, NLT) Now how’s that for an evaluation. God knows the very intricate details of our personalities, dispositions, strengths and weaknesses.

God is so knowing of everything about us that there is nothing hid from Him that is in us. There are no dark corners or closets full of skeletons that he doesn’t have in full view. Yet, or in spite of this (here’s the shout) “God pays no attention to what others say (or what you think) about you. He makes up his own mind.” And the last time I check the cross of Calvary, where Jesus died for you and me. The last time I read about the empty tomb where they laid the Son of God, I have proof of God’s mind and feelings for me. He says “Fear not, for I have redeemed you; I have called you by name, you are mine.” (Is 43:1, ESV) He says, “For I am the LORD your God” and nothing shall be able to separate us from the love of God which is in Christ Jesus. (See Rom 8:28)

So, I admit I am a work in progress and there is more for God to do. However, I thank God he’s not finished with me yet. Learn to find peace in what God thinks about you more so than what man thinks, “man looks on the outward appearance, but the LORD looks on the heart.” (1 Sa 16:7, ESV). I’m not excused from working on being a better Christian, this just means I have more room for growth and something to pray for God’s Spirit to develop in me.

Now where was I, that’s right . . . I have some more purging and cleaning up to do. Shalom